Henry and Glenn Forever and Ever, published by Microcosm Press, is now available as a digital collection on comiXology for the first time! Henry and Glenn Forever and Ever is a fictionalized parody of the domestic life of rock stars Henry Rollins (frontman of the hardcore 1980s punk band Black Flag) and Glenn Danzig (singer, songwriter, musician and founder of the bands Misfits, Samhain and Danzig) told in black and white comic book form by Los Angeles based painter and cartoonist Tom Neely. Rather funny stuff seeing these two rock/punk icons living in a domestic partnership and occasionally hanging out with their satanic neighbors Daryl Hall & John Oates.

Surprisingly, musician Henry Rollins had the chance to look at the book and has even autographed some covers for fans. He even spoke with LA Weekly on January 24, 2015 regarding the comic,

“One of my favorite uses of satire is a comic book that depicts me in a romantic relationship with rock vocalist Glenn Danzig…If I were to find [this] anything less than hilarious, then I am in the wrong business.” – Henry Rollins

The complete cult hit indie comic book miniseries, collecting issues 1-4 is 254 pages and includes extras like pinup art, is available digitally for only $6.99!

Synopsis for Henry & Glenn Forever & Ever:

The greatest love story every told has finally been released in graphic novel form. This epic tome features twenty short stories about the domestic life of “Henry” and “Glenn” and sometimes their neighbors “Daryl” and “John.” Digging beneath Glenn’s bricks in the front yard, Henry uncovers Glenn’s mother. Freshly unearthed, she moves in with him and Henry. Glenn’s issues come to the surface as she critiques his art, replaces his wardrobe, scrubs their dungeon, and recalls his childhood. Later, Glenn tries to sell his signature to a UPS driver, takes a punch, and has some daydreaming adventures with a plunger. Henry, “a loud guy with a good work ethic,” shows his darker side and indifference to a fan as he drinks black coffee and bonds with Glenn over their distaste for their own bands. These are two men who truly suffer best alone together.

Among other hijinks, Henry and Glenn go to therapy together, battle an evil cult in the forest, and profess their love for each other, all while dealing with jealousy and other normal relationship problems and trying to figure out if their soft-rocking neighbors are actually Dungeons and Dragons playing Satanists. The saga of Henry and Glenn is a true testament to the power of love to overcome even the biggest, manliest egos of our time. 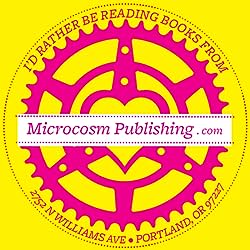 Microcosm Publishing is an independent publisher of nonfiction books in Portland, Ore that has been chugging along for over 20 years. We’re small, flexible, data-driven, resourceful, and scrappy. Microcosm emphasizes skill-building, showing hidden histories, fostering creativity, and challenging conventional publishing wisdom with books and bookettes about DIY skills, food, zines, and art.

PopCultHQ received an advance copy of Legends of Oz: Tik-Tok and the Kalidah #1 by Aspen Comics‘ Big Dog Ink imprint which arrives in stores this Wednesday, April 20th. The creative team […]

PopCultHQ’s Late Night Recap is your source for all that you missed last night. We will be bringing the best of late night that was newsworthy, a surprise, or some […]

The People v. O.J. – Those of us who saw the entire drama unfold from day one, the white bronco chase and through-out all the media-aided fiasco that was the murder […]